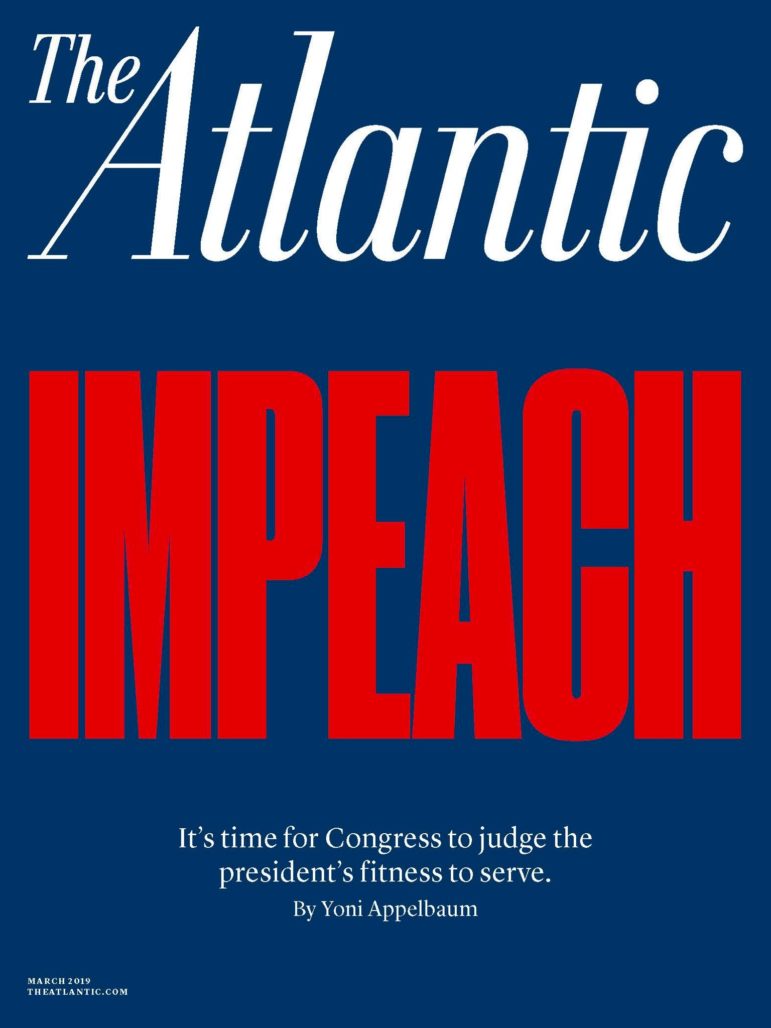 The March 2019 issue of The Atlantic features an important piece by historian Yoni Applebaum, in which he lays out the case for why we must begin the impeachment process against President Trump.

Applebaum details Trump’s many constitutional violations in his article:

…[Trump] has mounted a concerted challenge to the separation of powers, to the rule of law, and to the civil liberties enshrined in our founding documents. He has purposefully inflamed America’s divisions. He has set himself against the American idea, the principle that all of us—of every race, gender, and creed—are created equal.

Appelbaum rebuts many common objections to impeachment in his piece. He argues that impeachment is not an partisan issue, but rather individuals from both sides of the aisle have spoken out against Trump’s unconstitutional actions, and those who have worked closely with the president express the most alarm. Applebaum also addresses the trepidation Congress has expressed in beginning the impeachment process, choosing to “outsource its responsibilities to federal prosecutors.” But we cannot wait for judges or the Mueller Investigation:

Only by authorizing a dedicated impeachment inquiry can the House begin to assemble disparate allegations into a coherent picture, forcing lawmakers to consider both whether specific charges are true and whether the president’s abuses of his power justify his removal.

Trump has violated the Constitution repeatedly and profoundly. Regardless of politics, impeachment is a constitutional process designed by our nation’s founders for precisely this purpose:

[The founders] created a mechanism for considering whether a president is subverting the rule of law or pursuing his own self-interest at the expense of the general welfare—in short, whether his continued tenure in office poses a threat to the republic. This mechanism is impeachment….

Impeachment is a process, not an outcome, a rule-bound procedure for investigating a president, considering evidence, formulating charges, and deciding whether to continue on to trial.

Applebaum concludes his powerful piece with a call to action for Congress:

Today, the United States once more confronts a president who seems to care for only some of the people he represents, who promises his supporters that he can roll back the tide of diversity, who challenges the rule of law, and who regards constitutional rights and liberties as disposable. Congress must again decide whether the greater risk lies in executing the Constitution as it was written, or in deferring to voters to do what it cannot muster the courage to do itself. The gravest danger facing the country is not a Congress that seeks to measure the president against his oath—it is a president who fails to measure up to that solemn promise.

Want to get involved in the movement to hold President Trump accountable to the law? Click here to take action!