CAMBRIDGE, MA – Following the vote in the Cambridge City Council on April 3, 2017, five local communities have now voted in favor of Impeach Donald Trump Now’s Impeachment Resolution asking Congress to launch an investigation of President Trump’s corrupt business dealings, including violations of the U.S. Constitution’s Foreign Emoluments and Domestic Emoluments Clauses.  Other cities and towns that have passed this resolution include Richmond, Alameda, and Berkeley, CA and Charlotte, VT. 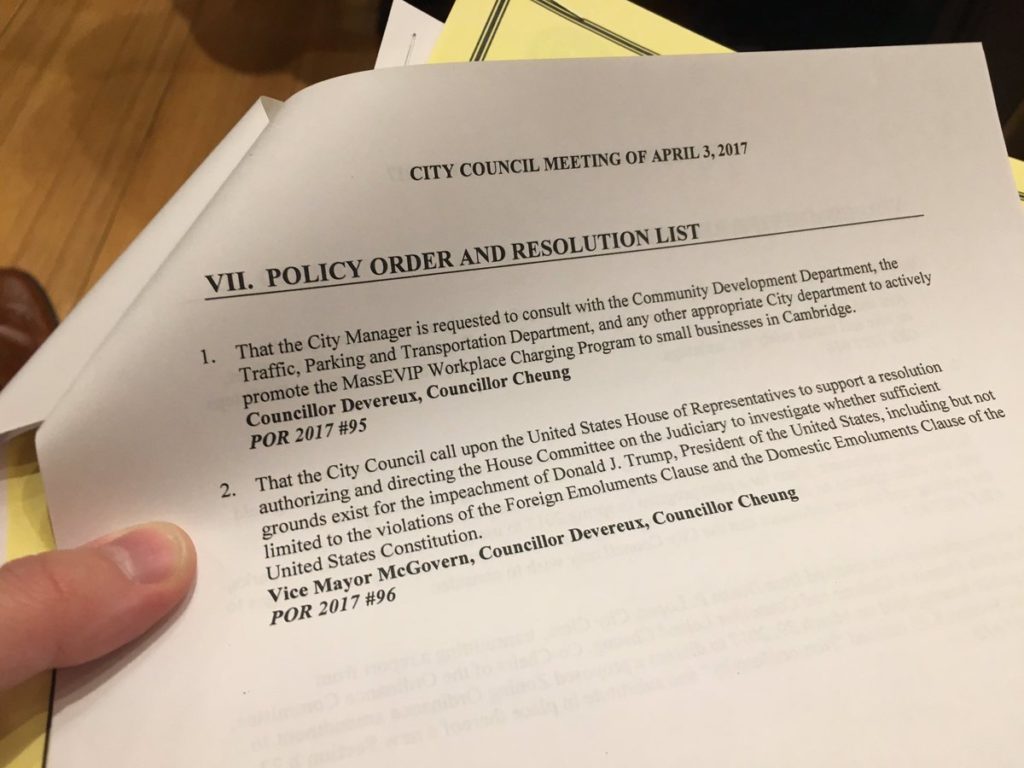 Testifying before the City Council, Free Speech For People Board Chair Ben Clements called the Trump presidency among “the most corrupt in our nation’s history.”  He stated that, “despite being repeatedly warned that he needed to divest his ownership interest in the Trump Organization” to comply with the foreign and domestic corruption clauses of the Constitution, Trump has refused to do so and has instead “aggressively used the presidency to enrich himself, his family, and his business associates at the public’s expense.”

To date, nearly one million people have signed a petition in support of the campaign’s call for an impeachment investigation and more cities and towns are scheduled to vote on this resolution in the coming months including Los Angeles, CA and Newton, Amherst, Leverett, and Pelham, MA.

“In the face of this constitutional crisis, Americans across the country are rising up to defend our democracy.  President Trump must be held accountable, through the impeachment process, for his massive corruption of the presidency and his flagrant violations of the Constitution,” said John Bonifaz, the co-founder and President of Free Speech For People.

“People in cities and towns across the country are starting to see how President Trump’s corruption and defiance of the Constitution is hurting our country. These votes are just the start of a national wave,” said Ron Fein, Legal Director of Free Speech For People.

President Trump’s personal and business holdings in the United States and abroad present unprecedented conflicts of interest and place him in direct violation of the U.S. Constitution. The Constitution’s Foreign Emoluments Clause provides: “[N]o Person holding any Office of Profit or Trust under [the United States], shall, without the Consent of the Congress, accept of any present, Emolument, Office, or Title, of any kind whatever, from any King, Prince, or foreign State.” The purpose of this provision is to prevent foreign influence or corruption. “Emoluments” from foreign governments include “any conferral of a benefit or advantage, whether through money, objects, titles, offices, or economically valuable waivers or relaxations of otherwise applicable requirements,” even including “ordinary, fair market value transactions that result in any economic profit or benefit to the federal officeholder.”

Furthermore, the Constitution’s Domestic Emoluments Clause provides: “The President shall, at stated Times, receive for his Services, a Compensation, which shall neither be encreased nor diminished during the Period for which he shall have been elected, and he shall not receive within that Period any other Emolument from the United States, or any of them.” This provision, which is not waivable by Congress, is also designed to prevent corruption.

To download a PDF of this Press Release, click here.
Please direct all press inquiries to [email protected].