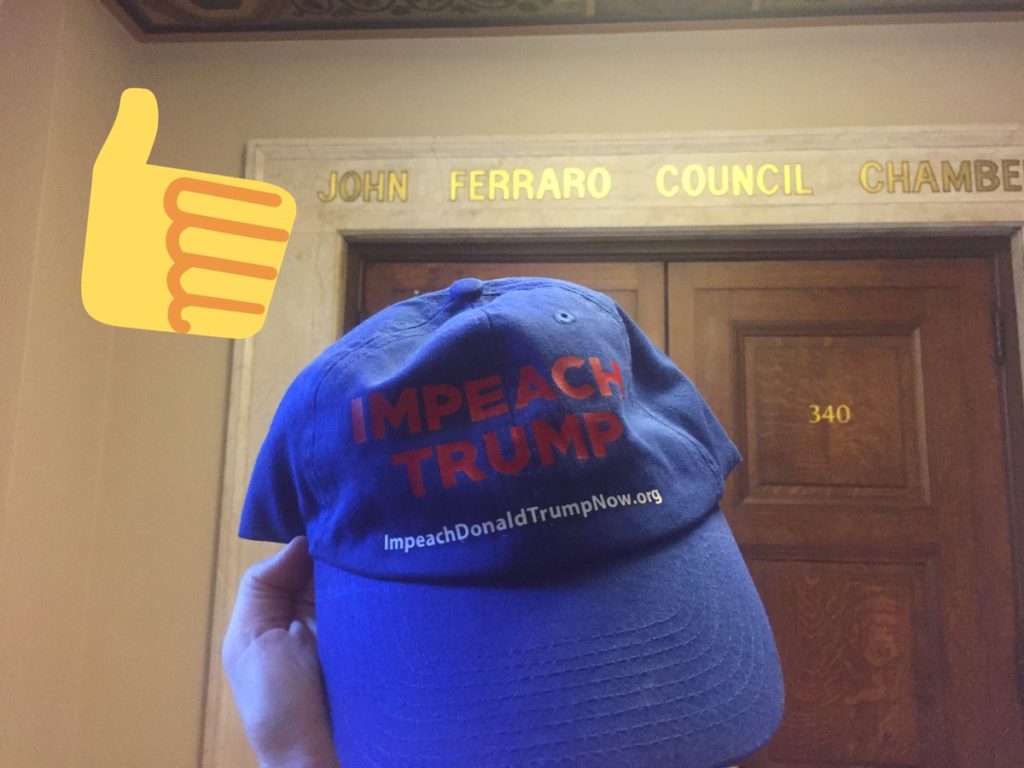 A committee of the City Council of Los Angeles voted unanimously to advance an IMPEACHMENT RESOLUTION to the full LA City Council.  The resolution was recently presented to Councilmember Bob Blumenfield by the West Valley Resistance.  Similar resolutions have been passed by Richmond, CA; Alameda, CA; Berkeley, CA; Charlotte, Vermont; and Cambridge, Massachusetts.

The WEST VALLEY RESISTANCE is a local resistance group aligned with the Impeach Donald Trump Now campaign and Indivisible. With the assistance from more than 50 local Indivisible Chapters, such as the Suffragette Sisters, they have taken the lead in urging the City Council to pass a resolution for Congress to support an investigation into whether President Donald J. Trump has violated the Foreign Emoluments Clause of the United States Constitution, or committed any other high crime or misdemeanor sufficient to warrant commencement of impeachment proceedings.

“Today’s vote by a committee of the LA City Council to advance a resolution calling for an impeachment investigation of President Trump marks a major new development in holding this President accountable for his direct and ongoing violations of the Constitution,” says John Bonifaz, President of Free Speech For People, which is co-leading with RootsAction the national campaign at www.impeachdonaldtrumpnow.org.  “The Impeach Donald Trump Now Campaign thanks the Councilmembers of this committee for this courageous vote and thanks The West Valley Resistance for leading this local fight in LA.  With nearly one million Americans already on board with this campaign, we are rising in the defense of our Constitution and our democracy!”

“Throughout the history of our country, difficult and essential changes have come from the grassroots. That is what’s happening via city councils as a groundswell for impeachment begins to take hold. This is just a start of civic empowerment to defend democracy with impeachment of Trump,” says Norman Solomon, coordinator of RootsAction.org.