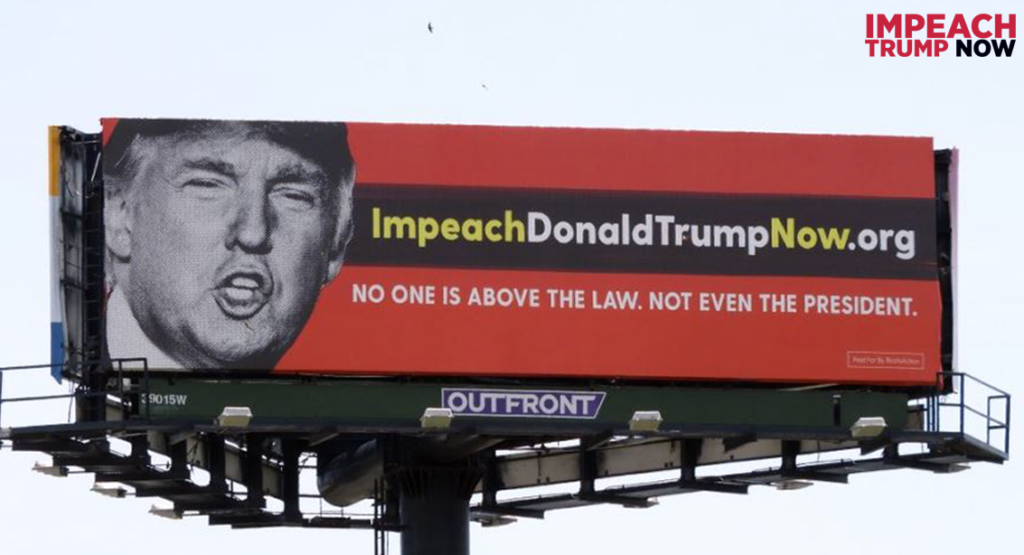 Citing Interference with a Criminal Investigation, Violations of the Domestic and Foreign Emoluments Clauses, Nearly 1.2 Million People Are Calling on Congress to Start an Impeachment Investigation Now.

With public pressure on Congress mounting by the day, the billboard reminds President Trump that no one is above the law and encourages people to join the call by signing a petition at www.ImpeachDonaldTrumpNow.org.

“The President is not above the law,” says John Bonifaz, the Co-Founder and President of Free Speech For People, one of the national organizations leading the Campaign to Impeach Donald Trump Now.  “He must be held accountable for his flagrant violations of our Constitution and for his abuse of power and the public trust.  And, we must demand that Congress initiate an impeachment investigation now.  Our democracy is at stake.”

“Momentum for impeachment is accelerating at the grassroots,” adds Norman Solomon, the National Coordinator of the online activist group RootsAction.org, which is cosponsoring the Impeach Donald Trump Now campaign. “As nationwide polling reflects, support for impeachment among the American people is vastly more widespread than what exists on Capitol Hill right now. It’s time for Members of Congress to catch up with the public.”

The Campaign to Impeach Donald Trump Now launched on Inauguration Day, led by two public interest organizations Free Speech For People and RootsAction.org, is calling on Congress to start this investigation based on the President’s direct and ongoing violations of the two anti-corruption provisions of the U.S. Constitution and based on the President’s apparent interference with a criminal investigation by firing FBI Director James Comey.  The campaign also recently expanded its call for an impeachment investigation to include questions of a potential conspiracy between the Trump Campaign and the Russian Government following the publication of June 2016 emails to and from Donald Trump Jr.

Impeach Donald Trump Now, a non-partisan campaign led by Free Speech For People and RootsAction.org, is pressing for an impeachment investigation of President Trump. To join our campaign, read our proposed Impeachment Resolution, or to learn more, visit: www.ImpeachDonaldTrumpNow.org.

Free Speech For People is a national non-partisan non-profit organization founded on the day of the U.S. Supreme Court’s ruling in Citizens United v. FEC that works to renew our democracy and our Constitution for the people, not big money and corporate interests.