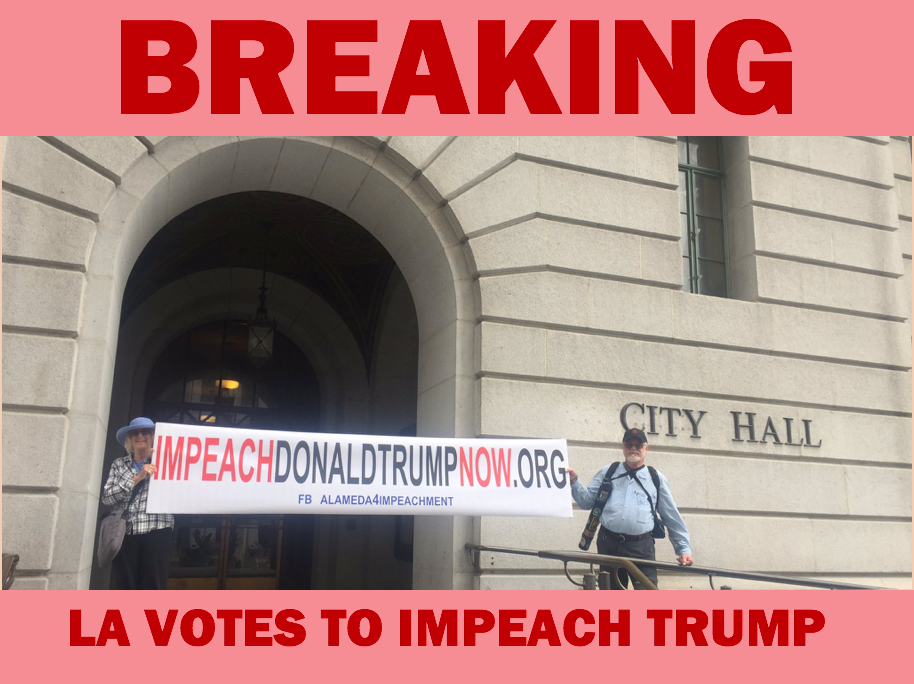 Today, we reached another major milestone in our campaign. Los Angeles City Council became the seventh city to pass a resolution calling on Congress to launch an impeachment investigation of President Donald Trump. With this vote, Los Angeles joins Richmond, Alameda, and Berkeley, CA; Charlotte, VT; and Cambridge and Leverett, MA.

The resolution was recently presented to Councilmember Bob Blumenfield by the West Valley Resistance based on a model resolution drafted by legal counsel at Free Speech For People.

“Mr. Trump has put his own self-interest ahead of the country,” said the West Valley Resistance, a grassroots volunteer-led organization that spearheaded the efforts in presenting the impeachment resolution before the Los Angeles City Council.

“Through his long list of business entanglements with foreign entities, with Russia as the most concerning, Mr. Trump along with his family and his entire administration has consistently used their position to put money in their own pockets by using his properties for government business, as well as using their political influence to promote their own family businesses.”

Today’s vote is a major step forward in our campaign’s effort to hold President Trump accountable for his direct and ongoing violations of the Constitution. We have the momentum—now we need your help to keep pushing this effort forward.

We’ve reached nearly 1 million petition signers and we want you to join our campaign by bringing an Impeachment resolution to your local government.

You can join our campaign, read our proposed Impeachment Resolution, stock up on Impeach Donald Trump Now merchandise, and find resources for how to get started by visiting our website.

Thank you for standing with us!

LOS ANGELES, CALIFORNIA – The City Council of Los Angeles will be considering an IMPEACHMENT RESOLUTION on May 5, 2017.  The resolution was presented to Councilmember Bob Blumenfield by theWest Valley Resistance and passed at the Rules, Elections, Intergovernmental Relations, and Neighborhoods Committee meeting on April 28, 2017.  Similar resolutions were passed by Richmond, CA; Alameda, CA; Berkeley, CA; Charlotte, Vermont; Cambridge, Massachusetts; and Leverett, Massachusetts.

The WEST VALLEY RESISTANCE is a local grass roots resistance group aligned with the Impeach Donald Trump Now campaign and Indivisible. With the assistance from more than 50 local Indivisible Chapters, such as the Suffragist Sisters, they have taken the lead in urging the City Council to pass a resolution for Congress to support investigation whether President Donald J. Trump has violated the Foreign Emoluments Clause of the United States Constitution, or committed any other high crime or misdemeanor sufficient to warrant commencement of impeachment proceedings.

A number of councilmembers already support the resolution, and local Indivisible and resistance groups from every district are expected to attend the meeting in a show of solidarity against the unprecedented corruption of the White House under President Trump.

Impeach Donald Trump Now is a non-partisan national campaign led by Free Speech for People and RootsAction.org [impeachdonaldtrumpnow.org]. The campaign recently delivered to Congress a petition calling for the impeachment that contained nearly one million signatures. 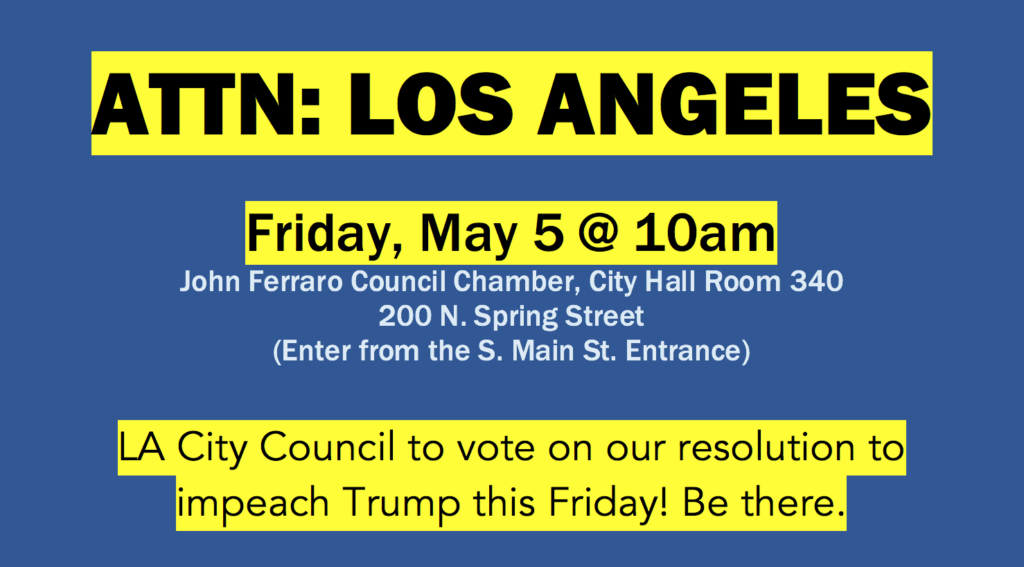 Last Friday, a committee of the LA City Council voted unanimously to advance an impeachment resolution to the full LA City Council. The resolution was presented to Councilmember Bob Blumenfield by the West Valley Resistance.

Click here to view our resolution on the City Council’s meeting agenda. 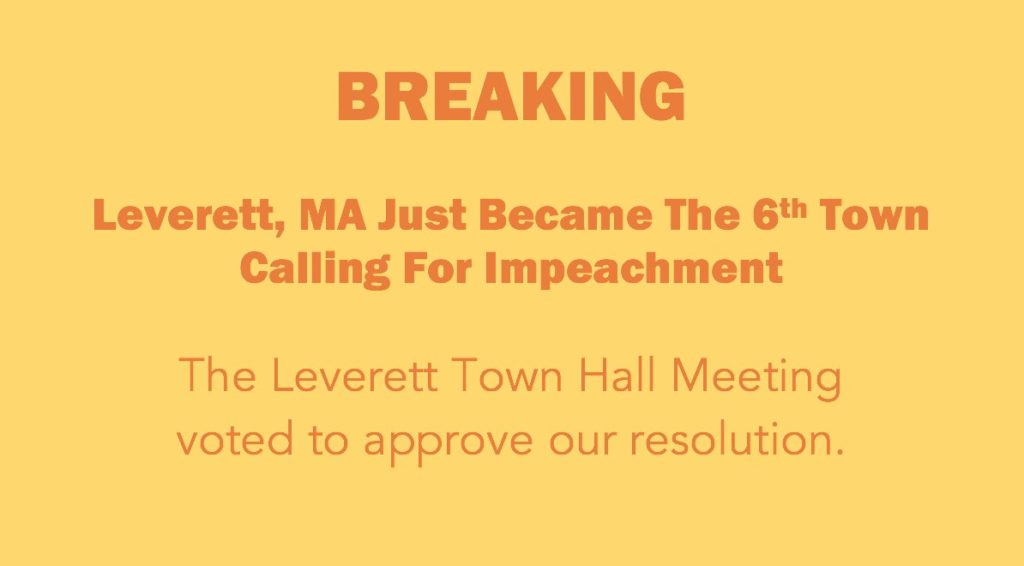 On Saturday, April 29th,  the Massachusetts town of Leverett became the sixth community on record calling for an impeachment of President Trump. The Leverett Town Meeting overwhelmingly voted in favor of our impeachment resolution, calling on Congress to launch an impeachment investigation.

Brookline and Amherst are the next Massachusetts towns to vote on our impeachment resolution. Will your town be next?

“I appreciate that the Committee has responded with speed to the resolution offering the support of the City of Los Angeles for any legislative action leading to the investigation of whether or not our President is in violation of the ‘Emoluments Clause” of the US Constitution.

This is a crisis in our democracy with no precedent.

President Donald Trump has been violating his oath to faithfully execute his office and defend and uphold the US Constitution since he was in sworn in with his hand on a bible, while the whole world watched.

And he’s getting away with it.

(I know you’ve received the analysis recently completed by George W. Bush and Barack Obama’s Chief Ethics lawyers and Harvard law professor Laurence Tribe – so if there’s doubt that President Trump is getting away with violating the Constitution, please have a look at their analysis.)

If we cannot as a country unite around the national security need to uncover the full scope of those foreign and domestic actors from whom our president is receiving emoluments, and what those nations or individuals have gotten or expect to get in return;

If we cannot come together to insist that the US Constitution also applies to President Trump;

If, by our inaction, we affirm that flagrant and unapologetic disregard for America’s founding document is to be tolerated then we may as well put the Constitution in the shredder – or worse, watch as it shrivels to become a crusty artifact of the lost promise of America.

We will need to bridge the gap between partisanship and patriotism in order to uphold the promise of our Constitution.  Can that bridge find builders here in Los Angeles?

I ask for the Committee’s unanimous vote to advance this resolution to the full Council.

Remarks before the L.A. City Council, April 28, 2017
Given by Michele Sutter of MOVI and a member of the West Valley Resistance