Puget Sound Communities 4 Impeachment, one of the nearly 6,000 resistance groups that have sprung up following the 2016 election, is calling upon Olympia City Council members to support a resolution asking Congress to investigate impeachment of Donald Trump. The resolution has been placed on Tuesday’s agenda for consideration.

“We urge Olympia’s Councilmembers to pass this resolution to convey the will of the Olympia community to have Congress investigate impeachable charges against Donald Trump,” said Bonnie Jones of Puget Sound Communities 4 Impeachment

This resolution takes no money or attention away from the many important issues the Olympia Council faces. Rather, it sends a strong message from the community to our Congressional delegation that this president needs investigation into his potential violation of the Foreign Emoluments Clause of the U. S. Constitution and other crimes such as obstruction of justice.

Prior to the City Council meeting, a rally for the resolution will be held from 6:00 p.m. until 6:45 p.m. on the front steps of City Hall. 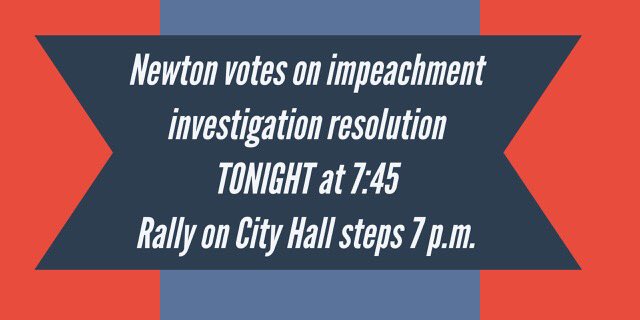 Citizens will rally on Monday, July 10 at 7 p.m. at Newton City Hall (1000 Commonwealth Ave.) to call on the Newton City Council to pass a resolution calling for an impeachment investigation of President Donald Trump to be launched in the House of Representatives. The Council is scheduled to vote on the measure at its 7:45 meeting that same evening.

END_OF_DOCUMENT_TOKEN_TO_BE_REPLACED

On June 29, 2017, West Hollywood became the 13th community to call on Congress to begin impeachment proceedings of President Donald Trump.

“Impeachment should be reserved as a last resort,” said West Hollywood Mayor John Heilman. “In less than six months in office, President Trump has already violated federal law by attempting to obstruct justice, and his administration is plagued by numerous conflicts of interest. We need to hold him accountable.”

With this resolution, West Hollywood has joined a growing number of cities, including the California cities of Los Angeles, Oakland, Berkeley, Alameda, and Richmond, as well as the Massachusetts cities of Brookline, Cambridge, Amherst, Pelham, and Leverett, in calling for the initiation of impeachment proceedings. 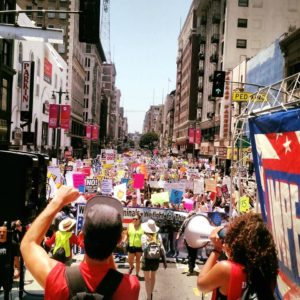 On Sunday, July 2, thousands of people took to the streets in dozens of cities across the country to show their support for calling on Congress to begin impeachment proceedings of President Donald Trump.

In Austin, Representative Green addressed the crowd, saying “I am here today because I love this country. We cannot let others steal the notion that somehow they’re more patriotic than we are. We are patriotic Americans.”

In Los Angeles, Representative Sherman, who recently drafted an article of impeachment for review by fellow Congressmen, said “Every day, Democrats, Republicans, the entire world is shocked by the latest example of America’s amateur president.”

Read more on the marches by visiting NBC News, Slate, and Salon.